This month, we are focussing on sewing and well-being. Today, we shine a light on the work of Lorina Bulwer (1838-1912), a woman who, having been denied her freedom and power of expression, used her needlework to give vent to her feelings and thoughts. 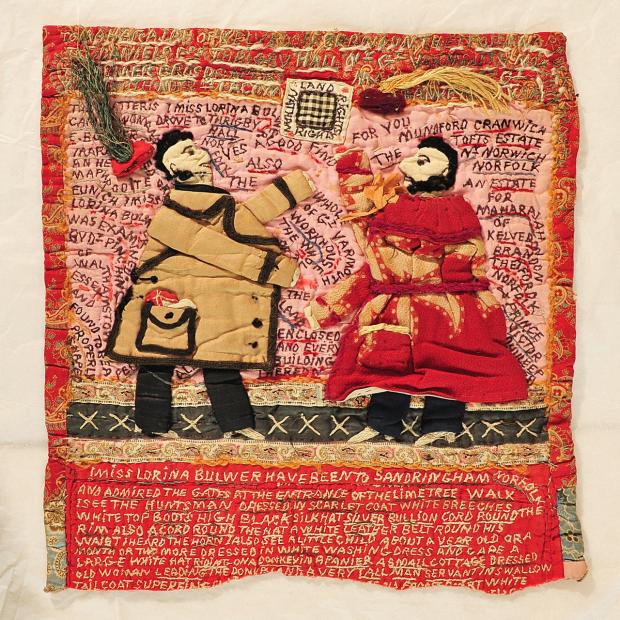 Born in Suffolk, after the death of her father Lorina ran a guesthouse with her mother until her mother’s death when Lorina was 55 years old. Lorina had not married and had no children, and after her brother decided that she was ‘incapable of running her own affairs’, she was placed in the Workhouse at Great Yarmouth. She stayed there for over a decade, until her death of influenza.

At this time, some ten percent of inmates at the Workhouse were held there due to mental illness and Lorina seems to have been included amongst this number. She appears to have resented her stay there and her treatment at the hands of her brother and sister greatly.

Perhaps as a form of therapy, Lorina was allowed thread and cotton which she used to sew textile ‘letters’ recording events in the Workhouse as well as her disgust at her abandonment. Her letters were written in all capital letters, without punctuation, and sometimes illustrated with pictures. They give an extraordinary insight into the experiences of a person who was not held in much esteem in her own day. Lorina was well ahead of her time in recognising that her treatment was unjust and inappropriate, and these embroidered letters are an amazingly vivid record of her life.

Given what we now know about the therapeutic value of sewing (as per this Guardian article), we can only hope that Lorina did indeed experience some soothing solace from her needlework.

For further reading, here is an article from the Great Yarmouth Mercury about Lorina’s work, and another one from Alabama Chanin Journal. An episode of the Antiques Roadshow was also dedicated to her work. I wonder what Lorina would think if she knew her work is now considered priceless, kept in museums and discussed on national television. I hope it would restore a sense of justice and satisfaction. Perhaps she would not feel she had ‘wasted’ years of her life, as she stitched into her letter.

Thank you for visiting! Now you’re here, why not explore our  blog to inspire your sewing! Check out our pages for your weekly quilting fix…